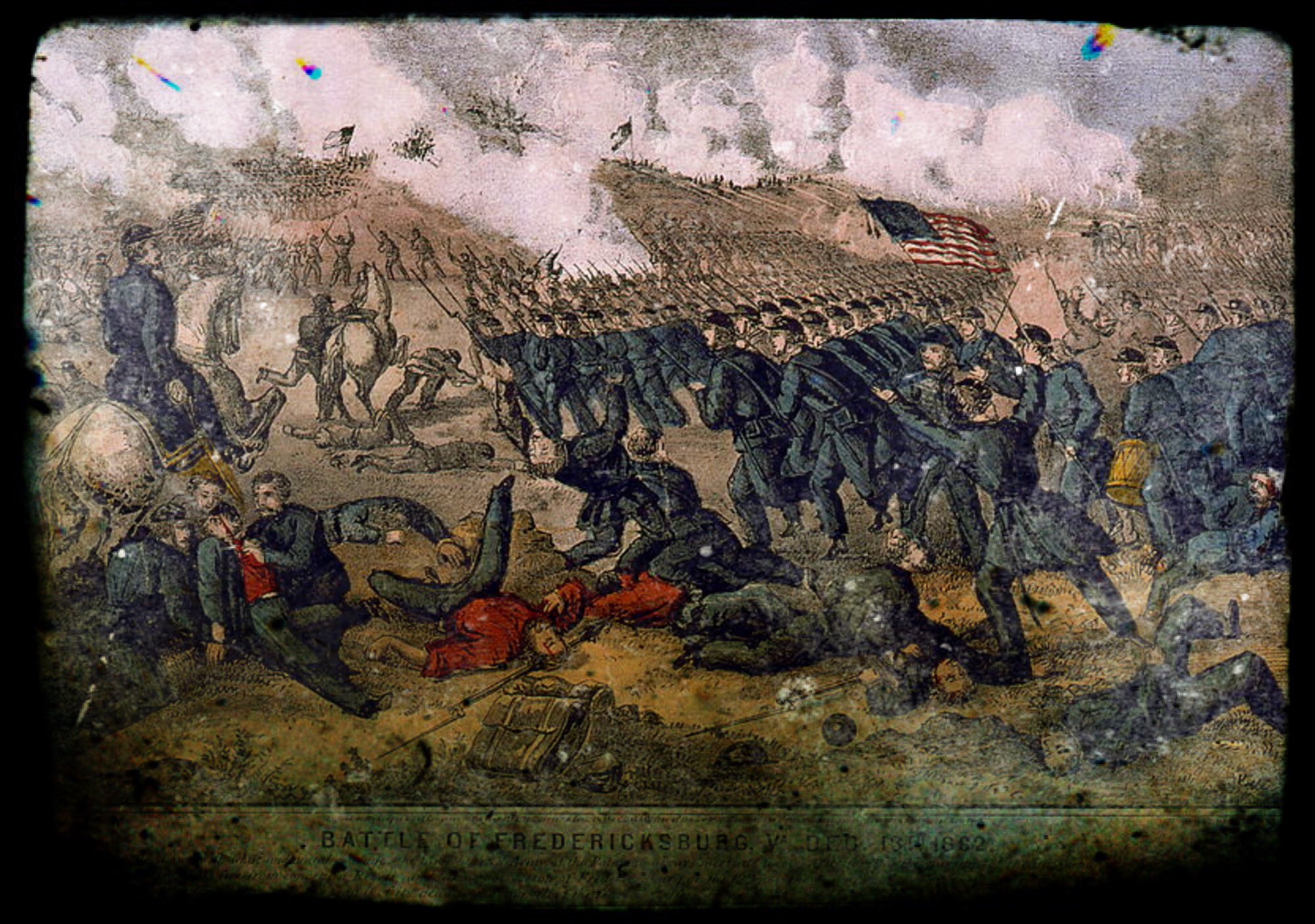 Unusual for the latitude on the night of December 14th 1862 above the bloodied and wounded soldiers the Aurora Borealis graced the night skies of Fredericksburg, Virginia.

The lucky ones had died early and immediately in the bloodbath. The unlucky ones died later when both Union and Confederate divisions ran out of ammunition and began beating and stabbing each other to death.

The unluckiest lay out in the field now screaming into the night, paralyzed by their injuries as the night’s frost settles on them. They will be dead by dawn and the Union army will be on the retreat wondering how it went so wrong.

Following George McClellan’s dismissal by President Lincoln for his hesitation to continue his offensive against famed Confederate General Robert E. Lee after the Battle of Antietam, General Ambrose Burnside took over the army of the Potomac and despite his original hesitations and aversion to accepting the promotion he concocted a daring strategy.

Ambrose planned a daring attack on the Confederate capital city of Richmond, Virginia. But it would be this plan coupled with poor communication, foolhardiness and just plain bad luck that would lead to a devastating blow to the Union’s morale and a battle so one sided it’s now considered a massacre. A battle which would see nine times more loss of American life during war time than the Invasion of Normandy.

General Burnside being encouraged by President Lincoln favored an aggressive approach against General Lee and his army of Northern Virginia. Burnside decided on a fast advance towards Richmond which would take the Union army directly south down the Rappahannock River.

At the beginning, the aggression paid off with sweeping victories as the Yankees marched South. But all just small battles and skirmishes. To cross the Rappahannock, Burnside ordered army engineers to march ahead and begin building pontoon bridges for their troops to cross the river. Little did Ambrose know then but this would be the beginning of the end of the successful campaign he had been leading.

The problems began early and were a sign of things to come. The Union engineers while attempting to construct the pontoon bridges were under constant duress. Being attacked by rebel sharpshooters throughout the process.

While work was being significantly delayed on the bridges by the sniper’s there was a much more grave situation unfolding. Upon the exposure of the construction of the bridges – General Lee realized where Burnside had planned to attack and mobilized his troops to greet the blue jackets when they did arrive. Not a good situation.

To make matters worse – due to a poor execution of orders – the bridge was delayed even more once the troops did amass at the river. Awaiting the opportunity to cross into the city of Fredericksburg. By this time Lee had the time to strategically place his troops to repulse Burnside’s attacks.

The following is an excerpt from history.com:

“The delay allowed Lee to move his troops into place along Marye’s Heights above Fredericksburg. The Confederates were secure in a sunken road protected by a stone wall, looking down on the open slopes that stretched from the edge of Fredericksburg. So strong was the Confederate position that one Rebel officer claimed “a chicken could not live on that field when we open on it.”

“Burnside decided to attack anyway. On December 13, he hurled 14 attacks against the Confederate lines. Although the Union artillery was effective against the Rebels, the 600-yard field was a killing ground for the attacking Yankees. No Union soldiers reached the wall at the top of Marye’s Heights, and few even came within 50 yards of it. “It is well that war is so horrible, or else we should grow too fond of it,” Lee observed to General James Longstreet as they watched the carnage. A bitterly cold night froze many of the Union dead and wounded.”

Burnside had to be urged to stop wanting to STILL continue the attacks the next day on December 14. The Union to that point had suffered over twelve thousand casualties. On the 15th a truce was called allowing the Union to collect their wounded and dead. Burnside would retreat to the north under the cover of darkness and rain.

Following the battle that was described to President Lincoln as a, “butchery” Burnside was replaced by General Joseph Hooker.

The one sided battle was a devastating blow to Union morale and Lincoln even reflected on it journaling, “if there is a worse place than hell, I am in it.”

This rout only fanned the flames of discontent that radical Republicans already felt doubting Lincoln’s leadership. One of the loudest critics of the president at this time was Zachariah Chandler who wrote that, “The President is a weak man, too weak for the occasion, and those fool or traitor generals are wasting time and yet more precious blood in indecisive battles and delays.”

In his defense, Burnside never wanted command and repeatedly denied the offers from Lincoln. He never felt comfortable with that level of command and was an honest and outspoken critics of his own ability to lead. After his dismissal following Fredericksburg he was stationed in Ohio and eventually relieved of duty by General Grant. The personally well liked, Burnside would still go on and lead a successful career in politics following his polarizing military career.

Ultimately as we know the North would go on to win the war under the leadership of General Ulysses Grant but to this day The Battle of Fredericksburg offers a true glimpse into the nauseating cost of war and how the poor decisions of a few men can cost the lives of thousands.

Medal of Honor: Rising Sun for the #playstation2
Playing older FIFA titles is still fun and it’s pretty mind blowing to see how vast the rosters and clubs are now in modern games. FIFA 2001 for the #ps2
In honor of the Sabres having three more wins than I expected them to get this year. Ice Hockey for the #nes
Back to the Future Part II & III for the #nes
Two thousand followers is crazy. I wanted to take a moment to thank all of followers that don’t interact with me at all, specifically all the IG rappers, Twitch layout bots, cash app and self help podcasters who will delete me as soon as they see this. 😂 😂
Cmon.