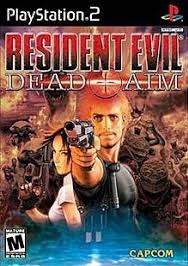 A confounding and buried entry in the Resident Evil canon.

There is a lot to unpack with this one, Acid Jazz intro and all. So let’s start with the basics.

Re: Dead Aim is a light-gun shooter and fourth in the Gun Survivor series originally published by Capcom. It is also the first in the franchise to feature first person shooting and third person movement seen in its predecessors in the Resident Evil series. It was originally created to be played with the Namco Light Gun Controller (which full disclosure – I do not have.)

Bruce Mcgirven is a United States military special agent that works for some secret task force formed in the wake of the events of Raccoon City intent on investigating and taking down Umbrella Corp.

He is also comically southern and painted out to be some sort of “shoot first – ask questions later” badass but really he is more like a walking Four Loko can that hollers things, “like aahhh Hot Dog!” and calls particularly large monsters, “big fella”. He’s an idiot and doesn’t really deserve to survive but does.

He looks like Down on the Upside era Chris Cornell if Cornell had been viciously beat by a wiffle bat and during her pregnancy his mother drank bleach every morning.

The game’s setting begins on a cruise ship because Resident Evil is obsessed with boats and the game begins with Bruce at the antagonist’s mercy – at gun point about to be executed. Showing that not only is he dumb but he’s also bad at his job.

The antagonist is a different form of mental agony that is impossibly easy to pick apart. The inexplicably lame, Morpheus D. Duvall who has next to no screen time but when they do it guarantees eye rolling and deep sighs.

Duvall is described as an ex-Umbrella-employee-turned-terrorist who is obsessed with beauty. Despite being let go by the company Duvall still knows about its plans to parade a bunch of nuclear warheads on a cruise ship and extort the US and Chinese governments for $50 Billion dollars. So Duvall and an unknown terrorist cell steal the T and G virus strains from an Umbrella lab in Paris, France board the ship and unleash mutated creatures on the crew.

As Duvall is about to shoot root-tootin’ Mcgirven in the head another person aboard tosses a grenade at them both allowing Bruce to escape into the ship. The grenade mortally wounds, Duvall who then begins injecting himself with the T-Virus. Thus transitioning (or dare I say, morphing 😏🙄) into a female Tyrant. With built in exoskeleton heels and breasts. Which is a pretty bold look.

Now it’s been expressed by much brighter and more capable writers than me about the toxicity of using Gender Dysmorphia as a villain trope for quite a long time now associating transitioning with mental illness and other misdeeds and I’d like to believe that in 2021 – we live in slightly more enlightened times regarding the transgender community. But it is interesting to note that Morpheus D. Duvall has not been the only villain in the Resident Evil franchise to be transgendered. See: Alfred Ashford (Re: Code Veronica)

That also isn’t the only element that is borrowed from past Resident Evil titles as enter stage left the elusive and able female character, Fong Ling.

Fong Ling is a Chinese spy that like Bruce Mcgirven is on the ship to waste Morpheus. But unlike gator tot Mcgirven, Fong Ling is actually capable of doing her job.

However it’s impossible to not recognize all of the parallels between Bruce and Ling as basically a stiffer, not as well written Leon Kennedy/ Ada Wong relationship. Except Leon Kennedy is cool and wasn’t conceived in the back of a 1979 El Camino. And Fong Ling is an unbelievably rigid, Ada Wong. Which makes their eventual blossoming romance all the more baffling.

God forbid Fong Ling just save the struggling Bruce’s life and NOT FALL IN LOVE.

Despite all of this..

With that said the game has it’s charms. It’s super short and that honestly works to its advantage – the plot has holes the size of Texas but it’s not much of a plot worth tying up anyways. It’s in a survival horror sense not because of ammo conservation (basically unlimited ammo) but because you can pretty much just run through the entire game, dodging zombies which is more satisfying, entertaining and realistic rather than engaging them.

I’m glad I own it. I have beat it more times than I’d like to admit but with the way prices have been for quite some time it’s super hard to justify a purchase on any level other then avid Resident Evil fan.

As soon as the first snowflakes fall I immediately want to hunker down and start an epic RPG. So I’ve decided to fire up this bad boy. Farthest I’ve ever made it in the series is about 3/4 through Chain of Memories. Going to begin the ps2 trilogy now. Kingdom Hearts for the #ps2
Yo what the fuck is up with #instagram making it so difficult to report weird as minor accounts. I have good friends on here who are well above the age of consent that get reported and blocked for showing off their ankles in a provocative manner. But here’s some weird fucking little kid account that has gross all over it (DEFINITELY UNDER THE AGE OF 13) and to report it you have to fill out a fucking book report and background check for both you and suspect account. Gtfoh. #minors #creeps #minorsoninstagram #gross #instagramreform #fuckingfixit #fixit #cp #wtfock
Time to play guess the game by load screen peeps.
Cmon
Red Faction for the #ps2
FlatOut for the #ps2