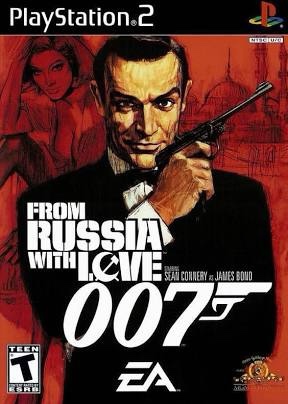 In celebration of the upcoming James Bond film, No Time To Die, being released October 8th 2021 let’s take a look at the different entries during the golden age of Bond video games on the PlayStation 2.

For past Bond title reviews:

I am pleased to announce not only are we two thirds of the way through the Bond games on PlayStation 2 ( I might **ACTUALLY** make a deadline, for once) but we have also arrived at the crème de la crème of Bond games and maybe even the pinnacle of action games on the console itself.

From Russia With Love is nearly flawless. It’s the perfect Bond experience rivaled only by Goldeneye for the Nintendo 64. This is a masterpiece and a must have for gamers and collectors everywhere.

Title: From Russia With Love

~ Penned by Bond veteran Bruce Feirstein, the game follows the storyline of the book and film, albeit adding in new scenes to make the game more action-oriented, as well as changing the affiliation of the main villains. Additionally, it features many elements of later Bond films to recreate the feel of the era such as the Aston Martin DB5 that debuted in Goldfinger (1964) and the jet pack from Thunderball (1965). (Bond Wiki)

~ The game would Sir Sean Connery’s last role before he would retire.

The original. The best. The man that made Bond. Sir Sean Connery reprises his role as James Bond by not only giving permission to use his likeness but also providing new voice acting for the game’s script. It’s well written and expertly preformed. A smoothness that only Connery could provide.

Not unlike her counterpart in the original film and novel, Romanova is a soviet army corporal and a cipher clerk that is acting in the best interest of Mother Russia.

She is taken by Bond’s photograph and insists on meeting him by promising that she can get deliver the Lektor (or Spector) in the book. The Lektor is a Soviet cipher device used to protect commercial, diplomatic and military communications. Both Bond and M figure it to be a trap but pursue the lead due to the importance of retrieving the Lektor.

The key difference of Romanova’s character between the film and the video game is that she is an unknowing pawn in the terrorist group, “Ocotopus” scheme to kill Bond as revenge for the death of Dr. No.

Originally portrayed by runner up Miss Universe, Italian actress, Daniela Bianchi in the game she was portrayed by American Voice actress, Kari Wahlgreen. (Some noteable work on gaming is providing the voice of Ashe in Final Fantasy XII and Shelke in Dirge of Cerebus: Final Fantasy VII.)

Eva Adara is essentially a fluff piece. Added in as an afterthought it’s like the game writers realized they didn’t have a “sexy” Bond Henchmen and acquired Menounos. She does fine, putting on a Greek accent learned from her parents but her inclusion doesn’t hurt or really add much to the story. Just a minor boss fight.

Due to a big dispute at the time of the game being written Ernest Blofield’s character was not available to be used due to Copyright. The same can be said for the original terrorist organization name, “Spectre” which was subsequently renamed to “Octopus” in the game.

Therefore Octopus doesn’t necessarily have an ultimate main Bond Villain and the game sees Bond take the organization down one henchmen at a time as the story progresses. With that said, Red Grant is by far the most nefarious and dangerous operator in the terrorist group coming close to killing Bond a few times, including almost strangling him.

Grant was originally played by Robert Shaw but was portrayed by Brian McCole in the actual game.

FRWL is an absolute masterpiece. It would be EA’s last Bond game before they would lose the rights to Activision and they would end their Bond tenure with an absolute bang. No Bond game released since has come this close to the entire Bond package. Between style, beauty, humor and just all around a fun and addicting gameplay experience From Russia With Love lives on as the franchise’s high water mark.

6 thoughts on “From Russia With Love”

Back to the Future Part II & III for the #nes
Two thousand followers is crazy. I wanted to take a moment to thank all of followers that don’t interact with me at all, specifically all the IG rappers, Twitch layout bots, cash app and self help podcasters who will delete me as soon as they see this. 😂 😂
Cmon.
Paperboy for the #nes
Nothing says social butterfly with tons of friends like drinking a beer playing Jeopardy! at 1 am after work by yourself. 😂 😂
Am I the only person who thinks this game is criminally overrated? The atmosphere is neat but the controls are rubbish and it just felt incomplete. Luckily I bought this in a bargain bin when Hollywood Video was going out of business in like 2008 😂